skip to main | skip to sidebar

One little set back.

I was all set to have a few hours of sewing ahead of me on the Queen’s Birthday holiday, but within 5 minutes of sewing, I had (somehow) managed to snap one of the overlocker needles. I dashed out to the local spotlight store, but they had no Janome overlocker needles, because they don’t sell Janome machines. I was very disappointed, as I was in such a mood to sew. I was finally sewing the hems to Abbey’s bedrooms curtains – a project, I am embarrassed to say, I started 18 months ago. I will toddle off later today to the local sewing centre and pick up some new overlocker needles.
I was still in a creative mood, so I found another, older, project to work on. When I was pregnant with Abbey, in early 2006, my mum and I knitted some purple and turquoise squares, to make a baby blanket. All the knitted squares were finished before Abbey was born, but I never managed to sew them together to make the blanket. I guess it did not help that Abbey was born one month early.
I am still a knitting novice, and can only knit in a straight line. I hope to learn to knit better, one day soon, and I am fascinated with crochet too.
Here are some photos of the knitted squares, and the soon to be completed blanket. 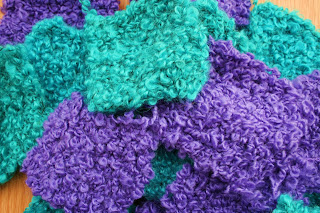 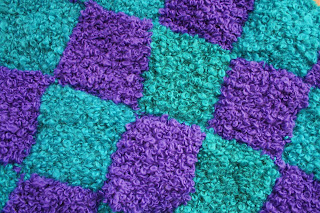 Posted by Cat from Raspberry Rainbow at 12:07 PM

Cat from Raspberry Rainbow
Hong Kong, Hong Kong
Hello, My name is Catherine but most people call me Cat. I love to sew, craft, bake, take photos, practice yoga and eat yummy food - not all at the same time though. I am from Australia and live in Hong Kong with my Shropshire boy and our two girlie-whirlies - they keep me busy in between baking, sewing and crafting.